There are 24 schools in the Springfield Public Schools district located in Springfield, Oregon. Sister schools Maple Elementary and Thurston Elementary were built in 2010. Terry Rutledge is the mechanical, electrical, and plumbing foreman responsible for managing the systems in all the schools throughout the district. When they were built, both Maple and Thurston were outfitted with condensing boilers from another manufacturer to heat the 56,890-square-foot buildings. Rutledge said that both boilers failed within a few years, and maintenance on the systems was an ongoing task. His team replaced every major component in at least one boiler at both schools.

With 24 schools under his supervision, Rutledge knew that standardizing the boiler systems would be beneficial with regard to serviceability, maintenance, and replacement parts. After evaluating product lines from several manufacturers, Rutledge selected Cleaver-Brooks ClearFire® condensing boilers due to their efficiency, durability, ease of parts, and maintenance. 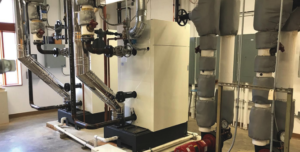 The boilers in several schools were replaced with ClearFire-C (CFC) condensing boilers, and Rutledge wanted these boilers to replace the faulty ones at Maple and Thurston Elementary Schools. The only problem was that the CFC boiler was too large to fit through the school’s doorway into the mechanical room. At the time, the schools were the two newest in the district, so Rutledge did not want to remove a window or put a hole in the side of the wall to bring in the boilers.

He expressed his concern to Mike Colombo at Cole Industrial. Cole Industrial is an authorized Cleaver-Brooks representative headquartered in Lynnwood, Wash., with offices in surrounding states, including Oregon. At the time, Rutledge did not know that Cleaver-Brooks was already working on a solution, the ClearFire-CE (CFC-E) condensing boiler.

The CFC-E condensing boiler, named a finalist in the 2018 AHR Innovation Awards, is designed to achieve up to 99% efficiency. It features dual temperature returns, making it simple to integrate into any building design. The CFC-E fits through a standard doorway and features patented tube and burner technology along with intelligent controls to optimize system performance and minimize costs.

Before Cleaver-Brooks launched the CFC-E, Rutledge said, “Mike was nice enough to call and tell me about the new product and ask if we were interested. I said we were very interested.”

Springfield Public Schools purchased serial numbers 1, 2, 3, and 5 of the CFC-E in December 2016 and installed the boilers the following month.

The state of Oregon requires an operator stamp to pull a boiler permit or install process piping, so Springfield Schools partnered up with Cole Industrial to sell them the boilers, pull the necessary permits, and weld the piping.

Rutledge is a steamfitter by trade, so after he and his maintenance crew obtained the proper permits, they installed the boilers in house. At the first school, they demoed out one of the faulty boilers and put in the new CFC-E. After they got it up and running, they went to the second school and did the same thing. According to Rutledge, “It was a very easy and successful install, and the facilities never lost heat.”

Rutledge said operating the boilers has been very easy as well. He added that the boilers are whisper-quiet, explaining, “When you walk into the boiler room, you have to touch the screen to see if the boiler is running.”

He also highly recommends that districts move towards standardization. “We are not unique in the fact that we have to ask our maintenance crews to wear many hats. To have a top-notch, experienced boiler tech come and know everything about 15 different boilers is a little bit challenging. By standardizing the systems, the output can be different, but the components are the same.”